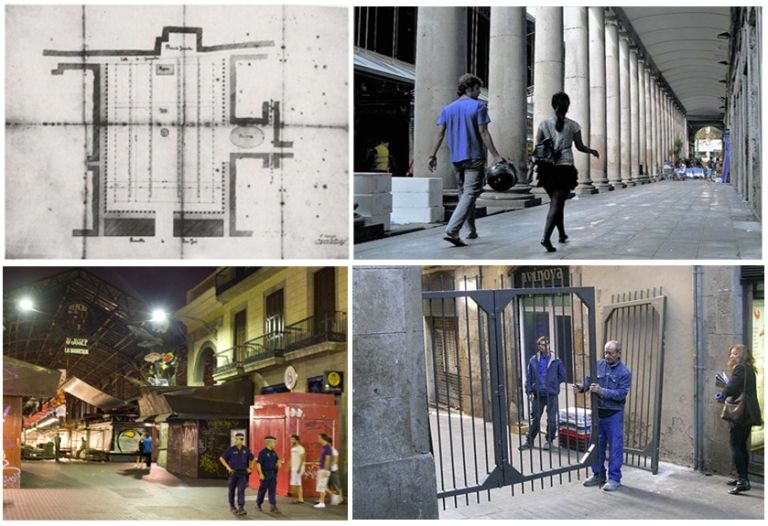 “Biutiful”, Iñárritu’s latest movie that tells the heartbreaking story of how (poor) immigrants (sometimes) survive in Barcelona, shows a different reality: far away from the groomed, pre-orchestrated, smooth and pictoresque image, this movie presents us an (unfortunately correct) complementary reality of illegal, corrupt, unfair and harsh scenarios within the city. Indeed beautiful, because of the honest way of telling these stories. Some of the scenes made me think of what happened to the Boquería, one of the central market places in the city, right next to the Rambla in Ciutat Vella. Last year, local newspapers showed shocking images of how at night, organized prostitution had taken over the surroundings of the market. The story illustrated how ugly a low cost tourist industry can make a neighborhood look, how beautifully clandestine events complement popular and tourist ones, all at the same place, all within 24h. The initial response was to increase police vigilance within the area. Nevertheless, some weeks later, other pictures were published in which we could see the same happening, only with some policemen standing right near it. The final solution was to turn the area into a gated area, to close off the market and its close surroundings from the public by establishing “opening hours”. More than 100,000$ was spent in a few days to construct gates at all entrances to the market. This made me wonder: are explicitly defined territorial boundaries our only way out? Do we no more succeed in simply sharing urban space in a way that still allows a personal and free interpretation of its boundaries? Could this market, with its unique ambiguous character and multiple uses, right in the heart of the city, be saved without adding fences, without establishing closing hours?
The most interesting part of this story is that, by fencing off the area, this market and its surrounding apartments, of which a few are (were) accessible through the very market space, now has been turned into a gated community, right in the centre of the city. From now on, after closing the gates, no more territorial overlap, established by this hybrid program of housing, market, bars, restaurants can be found. No more hanging out or using the galerías as a simple shortcut. In other words, a case of rather spontaneous sharing of space, weird as it sometimes was, has disappeared and made way for a closed territorial transition, where the steps between the public realm and a private equivalent has been carefully orchestrated and controlled. Will the result be that real estate prices in the area go up? Will the physical and territorial segregation result in a social gap, backed-up by an already ongoing gentrification, initiated by a fancy residential project at the back of the market? Beautiful indeed.