Urban transformation and growth is directly related to the planning, design and use of a series of urban infrastructures: from streets to highways, from bus to train lines and their connecting transport hubs, from bicycle lanes to systems of pedestrian routes, from rivers, canals or other waterways to harbor facilities or even considering industrial or commercial complexes as urban infrastructures. Planning strategies to transform or extend urbanized areas is mostly based on the planning or renewing of these infrastructures. However, its relationship to the surrounding urban fabric, more specifically the collective spaces it constitutes at the level of the streetscape, is not always an initial or integral part of providing these facilities. In many cases, the urban fabric is wrapped around or fragmented by these infrastructural projects, causing scale contrasts and struggle to integrate within, generating processes of misappropriation or misuse. For this reason, in depth research is needed to achieve critical insights on the relationship of infrastructures and their close environments, starting from their constituent streetscapes that define the perception and use by the inhabitants.

The first cases are situated in New York, part of a dense and compact metropolitan system and Ghent and Antwerp, part of a more diffuse meta-region called Flemish diamond, even though containing an almost similar population as the New York area. By comparing different large-scale infrastructures in different contexts, we study the differences (and in some cases, similarities) in planning, strategies of densification, scale contrast, proximity, permeability, programmatic adjacencies, accessibility and appreciation. These results are a first step towards further research on the relationship between touchdown infrastructures and the urban fabric, also in other cases (Brussels, Barcelona, Addis Abeba…)
During the last months we have been reading the different case studies through multiple site visits, interviews with planning and design experts working on these sites on site and context analysis.

The first two case studies are located in New York: the Brooklyn Bridge landing on Manhattan and the Port Authority Bus terminal area.
Apart from being a beloved landmark by New Yorkers and visitors, Brooklyn Bridge is an important large scale infrastructure providing connection to 120.000 vehicles a day. The road connections between the Brooklyn bridge and the FDR drive are located within a close distance from the residences along the main bridge infrastructure. Underneath and next to the connection roads along the bridge, we can find spaces that are used for construction or outdoor storage that are not always accessible, so with a non permeable character. The harsh contrast in scale, size, materials, spatial delimitation and movement creates a very specific streetscape with a strong character and identity, not always rejected by its inhabitants. The complexity of this area is high at all levels: the research seeks to disentangle the elements defining the perception, value and meaning of this touch-down infrastructure for the city’s future development. 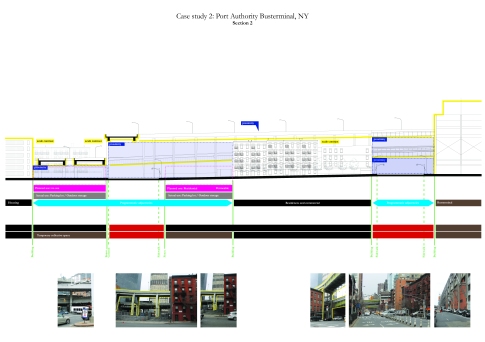 The second case study is the area between the Lincoln Tunnel and Port Authority Bus Terminal. The area has a wide variety in program and function from housing to manufacturing and empty lots used for parking space. Our research is focusing on the ramp systems that connect the Lincoln tunnel to the elevated bus terminal and proximity and scale contrasts with the environment. We felt the need to add a fourth collective space map (open space map, public space, collective space on the pedestrian level and collective space on the vehicle level) that exposes the different collective structure for pedestrians and vehicles: the study focuses in this case on the (dis)continuity of the collective spaces and the level of integration of the infrastructure in the urban fabric.

The third and fourth case studies are located in Antwerp and deal with the ring road infrastructure on the edge of the city center. The ring road consumes a daily 250.000 vehicles (the double of the New York case studies). The third case study focuses on the area between the Kennedy Tunnel and the Palace of Justice, embodying an important access to the city center. This case study illustrates the difference in soft and hard spatial delimitations and the undefined border between public space (considering urban space without access restrictions) and collective space (containing different kinds of access restrictions, not taking into account the property distinctions) on both pedestrian and vehicle level. The main infrastructure with all its connections consumes a contrasting large scale area close to a dense small scale city fabric. The Palace of Justice (built on top of an entrance tunnel) defines a perfect transition between different types of urban fabric and links to the Amerikalei (inner ring). Along the road infrastructures we detected some interesting functional adjacencies (like sand mountains next to an urban parking area), defining a collective space with a high heterogeneous character and an urban landscape defined by contrasts in use and scale, exposing a rather harsh environment right next to a more traditional system of traditional streetscapes that are considered “harmonic” by the inhabitants. 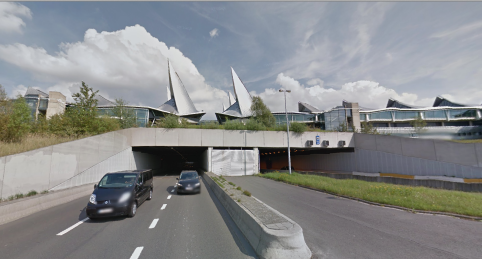 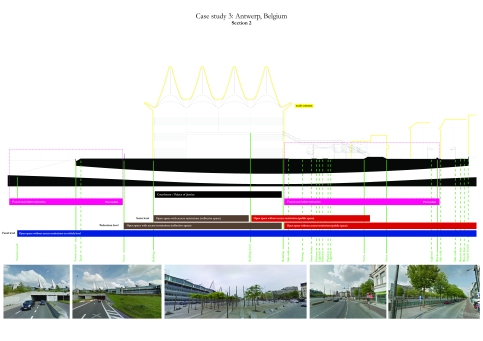 The fifth and sixth case studies are located in Ghent. The fifth case study is the N411 Fly-over infrastructure with a touch-down in Ghent South: the Fly-over has over a 30.000 daily vehicles arriving in the city and is currently the protagonist of a discussion about its sustainability at the level of experts, policymakers and inhabitants. The infrastructure is quit small in hight and scale but has the appropriation of a bigger scale infrastructure due to the surrounding open green space and the building heights. The soft spatial delimitations create a more continues open space and less spatial sequences. The next phase will focus on the very perception and transversal connections of this infrastructure and its environment. 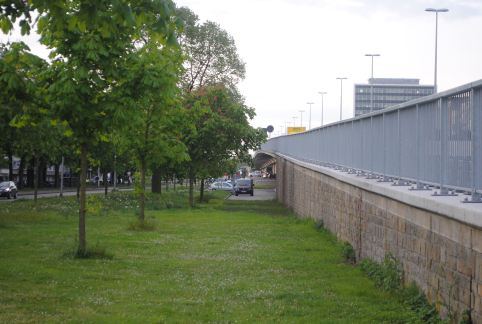 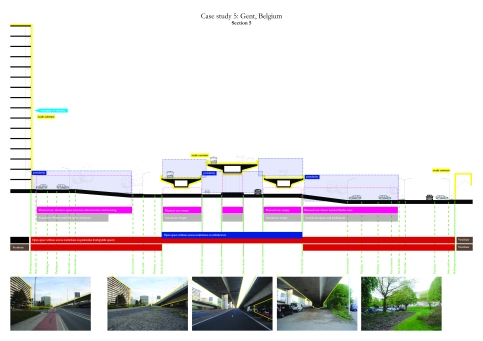 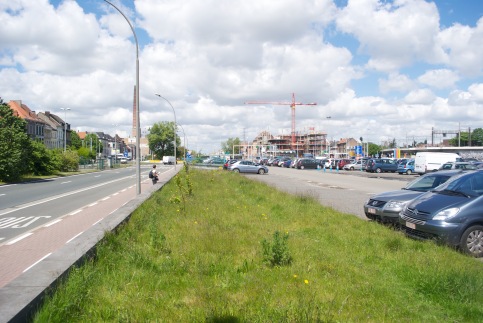 An update of the outcomes of this research project will follow soon.